Type your search terms above and press return to see the search results.

This unique place needs no introduction. I —while offending other valuable foundations— would always say that this is the one non-profit organization that has added so much to Mathematics community and Turkey in general. This is the only place that can take you out of today’s civilization[1], and accommodate you with open arms to do undistracted research, hold workshops etc. They try to support all academic events regardless of the size. They would try their hardest to provide accommodation, food, and of course the Turkish signature: unlimited amounts of tea. They even actively protect you by warning people to be silent and not to be intrusive if people start to distract studying groups. This village’s respect culture spreads across everyone there, from the founder Ali Nesin to the village’s volunteers and even to the young visitors.

I have been to the Nesin Mathematics Village three times. Two of these visits were 7 day stays, and one was an hour long touristic tour with some of my PhD friends. My first visit was in February of 2010. I was a student of Çetin Ürtiş at the time, working on my Masters Thesis. He organized a Number Theory themed workshop with Hamza Yeşilyurt, Ahmet Muhtar Güloğlu and Ömer Küçüksakallı. I remember this experience with fond memories. It was motivational. My second long visit was my recreation of this workshop. I have gained from this community and I wanted to return the favor. I wanted to have a workshop that some grad students can remember as motivational.

This place is a safe haven for thinkers. There is no politics, no business goals and the competition that comes with it. A village among all others with almost no permanent residents. A simple village that has chalkboards, tea, tables, and people with golden hearts that work hard to keep this place and its ahead-of-its-time vision. There are the ones who volunteer their times, and there are the ones in feeling who donate their hard earned cash. I want to thank them all for what they have created. 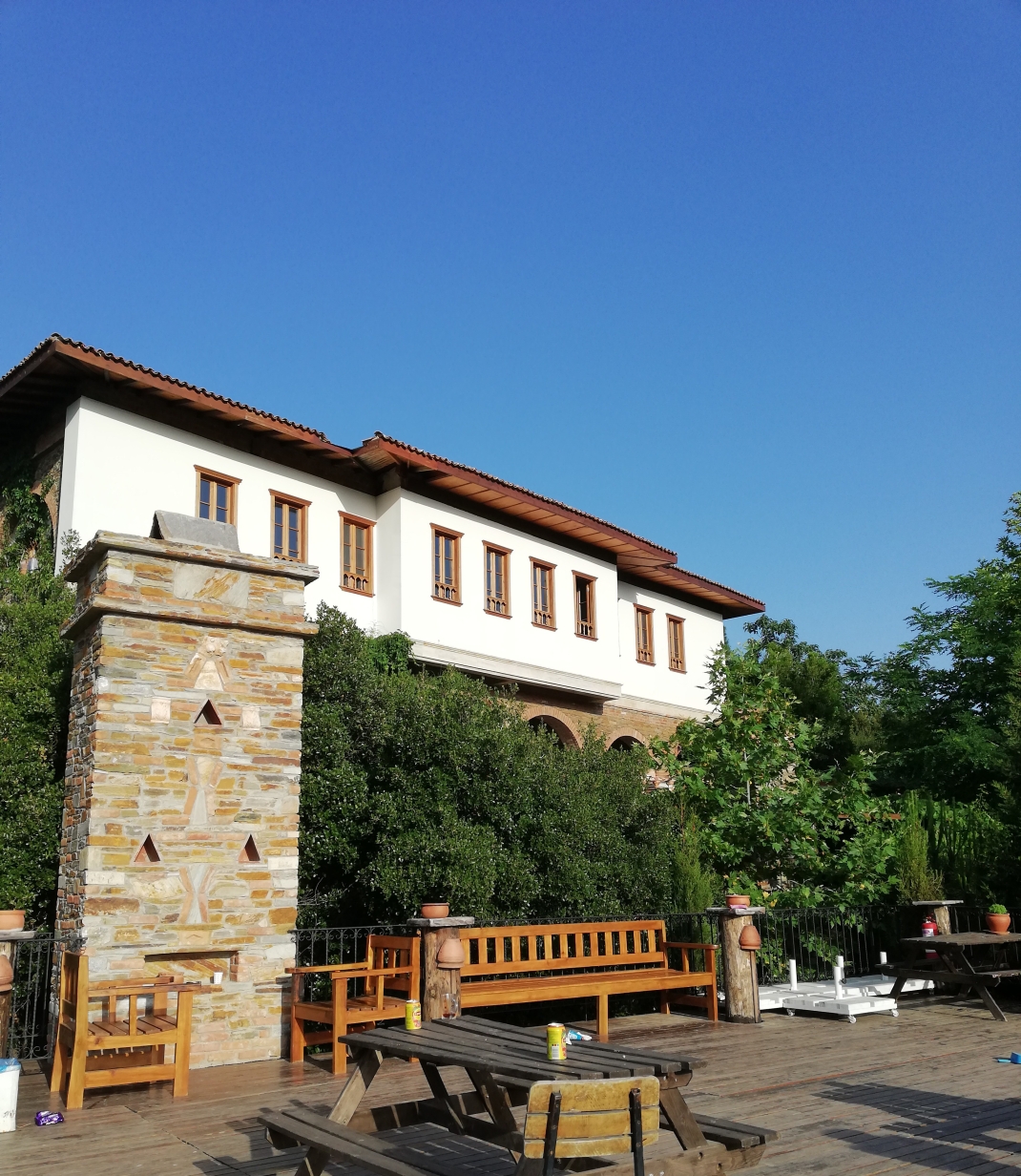 Two days after the workshop I asked myself “Would I have organized this workshop any different?” The answer was rather easy. If anything, I should have made sure that there was a second leg of this workshop. Now that need was in jeopardy, but thankfully the negotiations were in effect.

I feel like I accomplished something. I feel proud of this workshop. I am still surprised how everything came together all so perfectly. 8 months ago, it was just a small wish of mine that I casually mentioned to my new boss. Veronika was to kind and supportive. I wish she could have been a part of the conference too, but our big boss is a cute little toddler that wants her mom around—not in a village in Turkey.

I was hoping to have a week-long lecture series of 4 to 5 researchers on Combinatorics. I thought having a group of researchers teach their related but non-overlapping lectures and share their techniques in their current research was a good plan to stimulate the interest of new grads students. At least it was a good plan in my mind. I was not expecting students to be able to follow everything or to like everyone. I didn’t need to understand everything in my plan. I couldn’t have asked for anything more from participants. But Heck! If there was going to be a workshop, I wanted to have the most liked lecture series. I was going to keep it accessible at every step of the way. Therefore, I decided to do the combinatorial treatment and proofs in the theory of partitions. I was going to talk about those parts of my research only and keep the interest of students by just shifting boxes on Ferrers diagrams left and right. This was the anchor for the theme of this workshop.

The workshop was going to be on the Theory of Partitions and q-series. Therefore we needed people that can cover classical theorems well. I knew the best two people that can present these classical things. Kağan from Sabanci University and Hamza from Bilkent University would have been great for introducing q-series manipulations and modular forms for congruences, respectively. Then came the harder part. I needed a topic (and a person that can introduce it) that could add a new angle to this workshop dream of mine. I got lucky, the Research Institute for Symbolic Computation turned 30 and many former students of this institute converged for this event. Veronika introduced me to Zafeirakis (Zaf) from Gebze Technology University. I was forming this workshop plan and his research was a close cousin of theory of partitions. Most importantly he was interested in taking part. He was going to introduce Polytopes and Macmahon partition analysis. Not only that, he became the local organizer, and started our communications with the Nesin Mathematics Village. We have asked Kağan and Hamza for their participation and they both accepted.

Zaf and Kağan made the life easier for me. They made all the planning and handled all the correspondences. The only thing I handled after forming the group was Christopher Jennings-Shaffer’s involvement with this workshop. As the start time was getting close, Hamza needed to take a step back. It was a big loss. I still wanted participants to see the congruence side of the partition theory research. Chris, a close friend of mine from PhD studies in University of Florida, was in “close” proximity at the University of Cologne. He always had interesting research that I wanted to listen to too. I knew his topics were technical (just as how I felt about Hamza’s topics many years back). I thought that people should see some good use of Bailey’s lemma, rank, crank, and the spt-function. I felt that he would be willing to come and teach at this workshop, but the only caveat was that we couldn’t support his trip. He graciously accepted regardless of this issue. I was, one again, reassured that mathematics meant more than money.

I was in for a huge shock when the time came and I entered the village again. The village was almost a town now. It expanded greatly while not losing anything from its feel. The volunteer and the organization team had everything ready for us. They gave me a one room stone house under a mulberry tree’s shadow. Mulberries were tasty; they attracted many pretty butterflies, and sadly some sizely spiders. Chris picked a second floor room on another stone house on the next street. It was the end of the Antalya Algebra Days XX at the village. Many top Algebraists were leaving the town. There was also a middle school group acting their age as they wait for their lecture from Ali Nesin. We started to meet the participants of the workshop around dinner time. We met a three people research group from good universities that came together at the village to work on a mutual project. Our workshop was given the main library and they were going to be our neighbors in room next doors.

Our group was small but rather diverse; participants were spanning 5 countries and 8 institutes. Kağan had the most influence in numbers. He brought some PhD and Masters Students of his from Sabanci. Zaf had his one student from his project. There were two from the Akdeniz University; this was a great surprise. I have met their professors Ayhan and Mehmet in my advisor’s workshop and now in a sense I was meeting that university’s next generation.

First two days we stuck with the original schedule of 90 minute lectures. It was a good crash course for the people, but it seemed like it wasn’t leaving enough time for interaction or to look over the notes again. It made sense to change the program to include some discussion and interaction time. We have shortened our classes and added a block of research time. This was a great decision. Every instructor suggested some problems some open problems, some just exercise. My problem attracted some interest, but we had no luck. I was able to do some brainstorming some people in this research block. It seemed like some people were a little shy to interact, but everybody still seemed interested. They have worked well and it feels like between us some participants caught some ideas for their future projects. Chris’ topics might have been a little hard—as intended. He had some interactions in these research times but he was free enough to get to do his own work.

Kağan, I, and his students got the chance to bounce ideas in the official discussion times. We talked about a certain portion of Alladi’s work. I am hopeful to see generalizations of those results in the future. Also the Antalya group asked me some really nice problems on the second day of the new program, I was really happy to see them interested. We had long chats on Thursday and Friday. A main breakthrough (in my opinion) came from the group that Zaf’s questions originally attracted. He was able to hook his own student, another confident participant, and later me. The problem we worked on is now being typed, so I will not say much about it. Who knows? Maybe it will even become a paper one day. This group stayed up late, had many math arguments, tried new things, wrongly calculated many things on the board, and laughed a lot together.

On the last night of the event, we had a dinner in the neighboring village Şirince. Every participant wanted to be there, and they had a great time getting to know each other more. It reminded me of the dinner we had in my first visit to the village. It reminded me of my professors joking around between themselves and how it made me feel that they were also just normal people. I was so happy that we had full participation. After the dinner, we had some drinks and had lots of chat at the village.

We decided to go back to the original program to cover as much as we can and also finish early for the last day. Some participants were leaving early and we didn’t want them to miss anything. I started the day, said my words, and said my thanks for the other organizers and participants. Kağan took us to the first half of the day. Zaf had enough material to present our findings in the second half. He went through what we have already found, how we calculated things, the difficulties, and unfinished parts that we need to address. Chris finished the workshop as early as he wanted to, at the high point of the spt-function congruences. He bragged about finishing early in the following days too.

I want to quote Chris on his tongue in cheek list of our accomplishments:

Aftermath of this workshop was a mixture of two feelings: accomplishment and incompleteness. The workshop certainly came to a natural end, and it satisfied everything I hoped it would. On the other hand, it wasn’t stale yet. We were not bored of working deep into the morning, not getting enough sleep, but still waking up for the 8:30 am lectures. This made all of us say that there should have been a second workshop already planned in the horizon. That would have put our hunger at ease.